From June to August, WSU anthropology graduate student Amanda Thiel worked as an ethnobotany intern for the National Park Service at San Juan Island National Historical Park off the Washington coast. The park is conducting a Traditional Use Study of Coast Salish ethnobiology related to park lands and natural resources, and Amanda contributed to this project by creating an ethnobotanical inventory of traditional Coast Salish plant use based on literature research. She also designed the park’s new native plants restoration garden, learned about native prairie plants with local botanists and natural resource professionals, and photographed plants with traditional uses throughout the 2000-acre park. Amanda enjoyed learning how cultural anthropology is practiced within the National Park Service. She is excited to be continuing this internship part-time during the school year, working remotely on the Traditional Use Study and attending virtual consultation meetings with associated tribes to develop culturally appropriate exhibit content for the park’s new visitor center.

Graduate students Molly Carney, James Brown, and Dakota Wallen formulated the idea for a symposium at the 2018 Northwest Anthropology Conference that would center on the household archaeology of the Columbia–Fraser Plateau. This idea resulted in two conference symposiums and the ultimate publication of an edited volume, Of Housepits and Homes: 21st Century Perspectives on Houses and Settlements in the Columbia-Fraser Plateau, published as part of 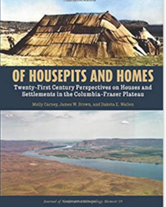 the Journal of Northwest Anthropology Memoir series. The publication of this volume sought to rejuvenate the discourse on Columbia–Fraser Plateau archaeology. Archaeological research throughout the Plateau region has been at a low over the past 10-20 years, apart from intensively local research programs such as the work of Anna Prentiss at Bridge River along the Fraser River.

In selecting contributors for the conference symposiums and the final edited volume, the students wanted a diverse array of voices to include tribal, agency, private sector, early-career graduate students, and established academics. They also wanted to draw on the legacy of Plateau research at WSU; for this they reached out to alumni who are established professionals: Ken Reid, Steve Hackenberger, Lee Sappington, Adam Rorabaugh, and Jim Chatters. The network of WSU alumni provided a great deal of support for this publication by acting as reviewers for many of the included papers. The Association for Washington Archaeology, the WSU Department of Archaeology, and the WSU Museum of Anthropology provided financial support to Molly, James, and Dakota so that the edited volume could be distributed by the Journal of Northwest Anthropology to all of their institutional members. The edited volume features 12 chapters of insightful research to the past, present, and future of Plateau household archaeology and includes papers studying regional changes in household occupation over time, and analyses of the material remains found within numerous houses across the Columbia–Fraser Plateau.

The volume can be found on the Journal of Northwest Anthropology website and on Amazon.