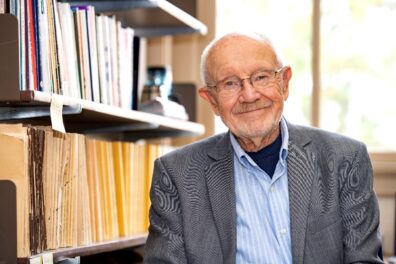 Washington State University selected Emeritus Professor William D. Lipe, an internationally recognized leader in the field of archaeology, to receive its highest award: an honorary doctoral degree. In a career spanning six decades, Lipe has significantly shaped the way archaeological resources are managed and how archaeology is conducted today.

The University bestowed the degree to Lipe at the fall Commencement ceremony in December 2021.

Lipe is one of the most trusted interpreters of the prehistory of the U.S. Southwest. He has chronicled 2,500 years of cultural traditions of the region’s Pueblo communities. He has also examined the goals, ethics, and professional standards of archaeological practice, becoming the single greatest contributor to these issues in his field.

Preeminent scholar in his discipline

Lipe is one of the founders of “conservation” or “public” archaeology—projects that study archaeological sites impacted by the nation’s economic development.

From 1978 to 1985 he led WSU’s collaboration with the University of Colorado on the vast Dolores Archaeological Program. One of the largest such projects in the nation’s history, it became a model for structuring large-scale archaeological investigations.

He also helped develop the nonprofit Crow Canyon Archaeological Center in Cortez, Colorado. The 170-acre “living classroom” provides research opportunities and helps to preserve the rich archaeological record of the Ancestral Pueblo Indian cultures of the region. Lipe served part time as its director of research in the late 1980s and continues to sit on its board of trustees. Two endowments named for him have been established at Crow Canyon’s Research Institute.

In the 1990s Lipe was president of the Society for American Archaeology, a professional society that he helped transform into an authoritative resource for archaeological practice and professional ethics. The Society has recognized him with the Distinguished Service Award, its highest honor.

He has sat on the boards of a number of professional societies and is also a fellow of the American Association for the Advancement of Science.

Long-time member of the WSU faculty

Lipe has spent the bulk of his career at WSU as a member of the Department of Anthropology, enthusiastically introducing students to the study of archaeology. He has mentored dozens of graduate students who have gone on to prominent and diverse careers in the field.